Recently, there have been solicitations for GeoUnion T shirt designs. We've been trying to make a T shirt for a while, but due to lack of design submissions, it dead-ended until now. Here's my contribution: 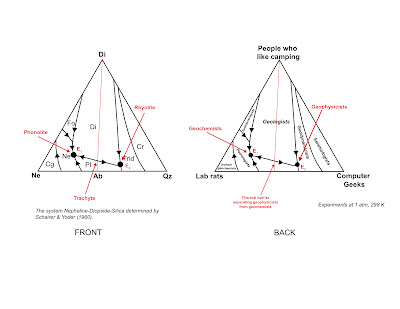 Whether or not it makes it to a T shirt, I still like it and think it's a tongue-in-cheek joke on the different types of earth scientists out there :-)

In other news, Houston's "winter" has been gradually warming up in the past week or two. Today and yesterday it was over 70 degrees! Yesterday, in particular, was one of those strangely warm, Southern winter days with brooding rainclouds and a subtle chill in the air. Such days always feel wildly anomalous to me, even though I've lived in this neck of the woods for 6 years already. Something deep down inside me feels a connection to the Northern snow, almost a missing for its familiarity.

Hmm... one more random thing. I had a jar of kimchi in the fridge that I bought 3 weeks ago. There's no expiration date on kimchi as far as I remember (I guess it's a sort of "controlled rotting" of cabbage anyway). But, the interesting thing was that when I opened it, the kimchi juice fizzed and bubbled! I wonder if I hadn't opened it, would the lid have eventually blown off from the pressure of fermentation inside?

This is clever. Very clever. However, I have to say that there is something wrong with the plot. I think you have "geochemists" in the wrong spot. Geochemists should coexist with isotope geochemists. Petrologists should sit on the eutectic. I'm biased of course, but true petrologists require geochemistry, physics, field geology, and math. Many geochemists don't actually look at rocks... but all petrologists look at geochemistry and beyond.